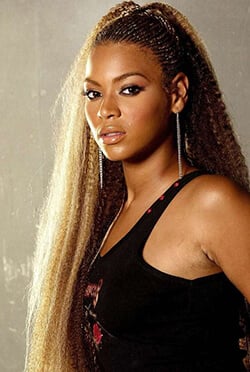 BEYONCE ATTENDED ELEMENTARY AND MIDDLE SCHOOL IN HOUSTON. THEN SHE HAD HER FIRST DANCE CLASSES. SHE IS ONE OF THE CELEBRITIES WITHOUT DIPLOMA AS SHE NEVER GRADUATED HIGH SCHOOL AFTER DROPPING OUT AT THE AGE OF 15.

Beyonce Knowles is a famous R&B singer from Texas, born on September 4, 1981.

Her amazing voice and performing talent were obvious even in her early childhood years when she won a local singing competition. In 1990s, she became famous for singing in girls-band Destiny's Child, and in 2003 she debuted with her first solo album that won five Grammies. From that moment her career skyrocketed, she released six highly successful albums and became a world class celebrity both because of her singing and dancing talents, her charisma, and beauty.

Beyoncé attracts fans with her unique visual style of performance. The singer uses choreography, elaborate costumes and experiments with light to add variety to her performances. They help to create a unique image and external data.

Beyoncé is considered not only the queen of pop music, but also a pop star, who became one of the first to permanently use the new generation of Lace Wigs. The number of overhead hairstyles in the singer's wardrobe is in the tens and hundreds, and their cost reaches $ 1 million.

To create the perfect image, the singer at one time resorted to plastic. The artist is credited with rhinoplasty, mammoplasty, and liposuction. In 2011, she completely bleached her skin.

In 2020, with the onset of the coronavirus pandemic, the singer and her husband decided not to risk it and retired to an island in the Pacific Ocean. The musicians decided to extend their kind of house arrest until the situation in the USA changes.

In isolation, the artist sang the song When You Wish Upon a Star from the cartoon "Pinocchio", and also donated $ 6 million to doctors who treat coronavirus patients.

Father: Beyonce’s father’s name is Mathew and he is famous for promoting her daughter’s career as a manager of her first girls band called Destiny's Child. Before that, he was a sales manager.

Mother: Her mom’s name is Tina. She is a fashion designer and she took part in Beyonce’s career too, creating costumes for her and other members of her band.

Siblings: She has a sister named Solange, who is also a popular singer. Her other siblings are named Nixon and Bianca.

Kids: she has three children with Jay-Z. They are Blue Ivy Carter and her twins Sir Carter and Rumi Carter. Which are boy and girl.

Beyonce's net worth 2020 is $500 million.. This makes her one of the richest female celebrities of all time. She and her husband together are the riches celebrity couple, their common net worth is more than $1 billion.

Place of living: The famous couple owns a number of expensive properties, including a luxurious $43 million villa in NY, $40 million mansion in Malibu, and a house in London.

Beyonce is actually her real name. Her second name is Giselle. And her real family name is Knowles and she added Jay-Z’s family name that is Carter to it after their marriage.

What is her ethnicity?

She is mostly African American and she also has French and Spanish roots.

What was she as a child?

She was a little shy as a kid and it was hard for her to make friends with other children. However, her singing talent became obvious very early and she always dreamt of becoming a superstar. At the age of 8, her incredible voice was noticed by her dance teacher. In her school years, she won a talent competition.

Why did she decide to start a solo career?

She left her band just because she became too mature for its format and decided to focus on her personal goals, just like the other girls.

What was her first album after she left the band?

Her award-winning first album was “Dangerously in Love”. This work was released in 2003. And in 2004, her first solo tour followed.

How did she fall in love with Jay Z?

Despite rumors, these two were friends at first. It is exactly the close friendship that became a foundation of their long-lasting and faithful love to each other.

The couple had a quite humble private wedding ceremony in NY. It was attended by their friends and relatives.

And what about charity?

Beyonce is known as a very generous person, who fights against poverty, discrimination, and diseases. She co-founded charity organization to help victims of natural disasters. She also gave money to several charities and served as ambassador. During last years, she became one of the most famous feminists and she fights for women’s rights in all possible ways.

What are her bad habits?

She has no major bad habits. She drinks alcohol and smokes only from time to time.

What are her awards and records?

In 2010, she won 6 Grammies during one ceremony. She was also renowned as one of the most beautiful and the richest singers and she was in the Forbes list several times. Also, when she announced her pregnancy, the tweets about this event were so numerous that became a world record.

What are her businesses?

Beyonce launched her own fashion line and several fragrances. To this, she signed several contracts with major brands, including Pepsi.