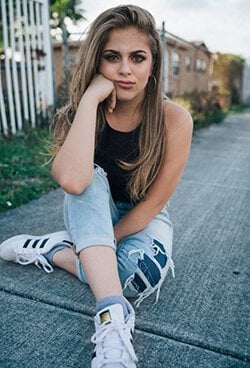 HER SOCIAL MEDIA CAREER IS HARD TO BALANCE WITH EDUCATION, SO THE GIRL SWITCHED TO HOME-SCHOOLING

Baby Ariel is Muser and YouTuber from Florida, born on November 22, 2000.

Her fame began on Musical.ly app, where she signed up in 2015 and quickly began attracting a massive audience with her lip-sync videos. Now she is a real social media craze with millions of followers and one of the most promising and popular teenage internet celebrities. On her YouTube, she posts tutorials of how to make Musical.ly videos, as well as shares videos about her life and participates in different challenges. Across different social media, she has more than 16 million of followers. People like her for her outstanding charisma, sense of humor, and joyfulness.

Blogging is a relatively new area of popularity. And it is not a fact that it will be able to hold out on the wave for 20-30 years or more. And Baby Ariel understands this perfectly. They strive to maintain their popularity by participating in television shows and youth series. But still she dreams of a singing career. And he takes all the steps to this:

Ariel has already recorded 8 singles. Each of them has amassed several million views on YouTube;
The singer's first album will be released very soon;
The media have already christened her the savior of pop music, and some even prophesy the glory of Michael Jackson.
Let's not forget that Ariel is still a very young girl. At the same time, for her 19 years, she managed to do much more than many of us in our entire life. She not only achieved popularity herself, but also extended a helping hand to other girls suffering from troll attacks. Having no musical education, but possessing a very characteristic voice and manner of performance, she made her way into the popular studios of America. Over the past 5 years, Ariel has won as many awards as many have failed to receive in the entire history of the family.

Nevertheless, she remains an active and cheerful teenager who studies well and is already preparing to enter the university. “Only after receiving a full-fledged education will I be able to devote myself 100% to what I love,” says Ariel. It remains only to wish her success in this.

Father: Her dad is Panamanian and his name is Jose Martin. He is a good friend to his daughter and he always supports her. His Twitter account is @joselmartin.

Mother: Her mother is American. Her name is Sharon Kremen Martin and she is from New Jersey. She often appears on her daughter’s videos and she even has her own musical.ly account called musical.lymom.

Siblings: her younger brother Jacob, born on March 21, 2004, is a popular social media personality too. His nickname is King Jacob and he often collaborates with his sister on musical.ly and YouTube videos. Ariel loves him very much, though he is sometimes a little annoying.

As of 2020, Ariel’s net worth is estimated $2.5 million. Just like all social media stars, she makes a decent amount of money on advertising and featuring sponsored products on her photos and videos.

the girl still lives in South Florida in her parents’ house. She doesn’t own any cars and houses.

Her real name is actually Ariel. And her family name is Martin.

What was her first and her most popular videos?

Baby Ariel’s first video was lip sync for a song by Nicki Minaj. And her most popular video is a Musical.ly tutorial, where she teaches her fans how to make awesome videos for this app.

How did social media change her life?

Social media fame helped Ariel to become more self-confident. Now, the girl is recognized by people in the street and it makes her a bit confused. Of course, it gave her not only fans but haters too. It also takes a lot of her time, so she had to become online-schooled.

What is her agency?

In 2016, Ariel signed a contract with CAA talent agency.

What does she do apart from being a social media celebrity?

Ariel studies in school online and just lives an interesting life full of friends and events. In 2017 she released her own sticker app Arielmoji. She also sells some merch on her website, including clothes, lipsticks, bags, pop sockets, and phone cases.

Her fans adore her smile, her beautiful eyes, and personality.

What was the first time she realized she was popular?

The first time she understood that people recognize her was in the supermarket. Someone took a picture of her and when she came back home she found it on Instagram. She was really confused about that.

What is her fight against bullying?

Baby Ariel was suffered from bullying, both online and offline, after she became popular in social media. As she understood she was not alone, she created her own campaign against bullies #Arielmovement. Her fans say that the girl taught them how to overcome this trouble and stay kind and confident whatever people say.

What is her attitude towards school?

She thinks that education is important but as she becomes more and more popular it gets harder for her to balance her fame with studying.

What are her awards?

In 2016, she won the first ever Teen Choice Award for Choice Muser.

What is her top advice as of how to make an awesome Musical.ly video?

She says that it is very important to decide on the song you love the most at the moment, then make sure you know the lyrics, get into the right mood, add hand motions, and start filming! She also gladly shares her own favorite hand motions in her video tutorials.